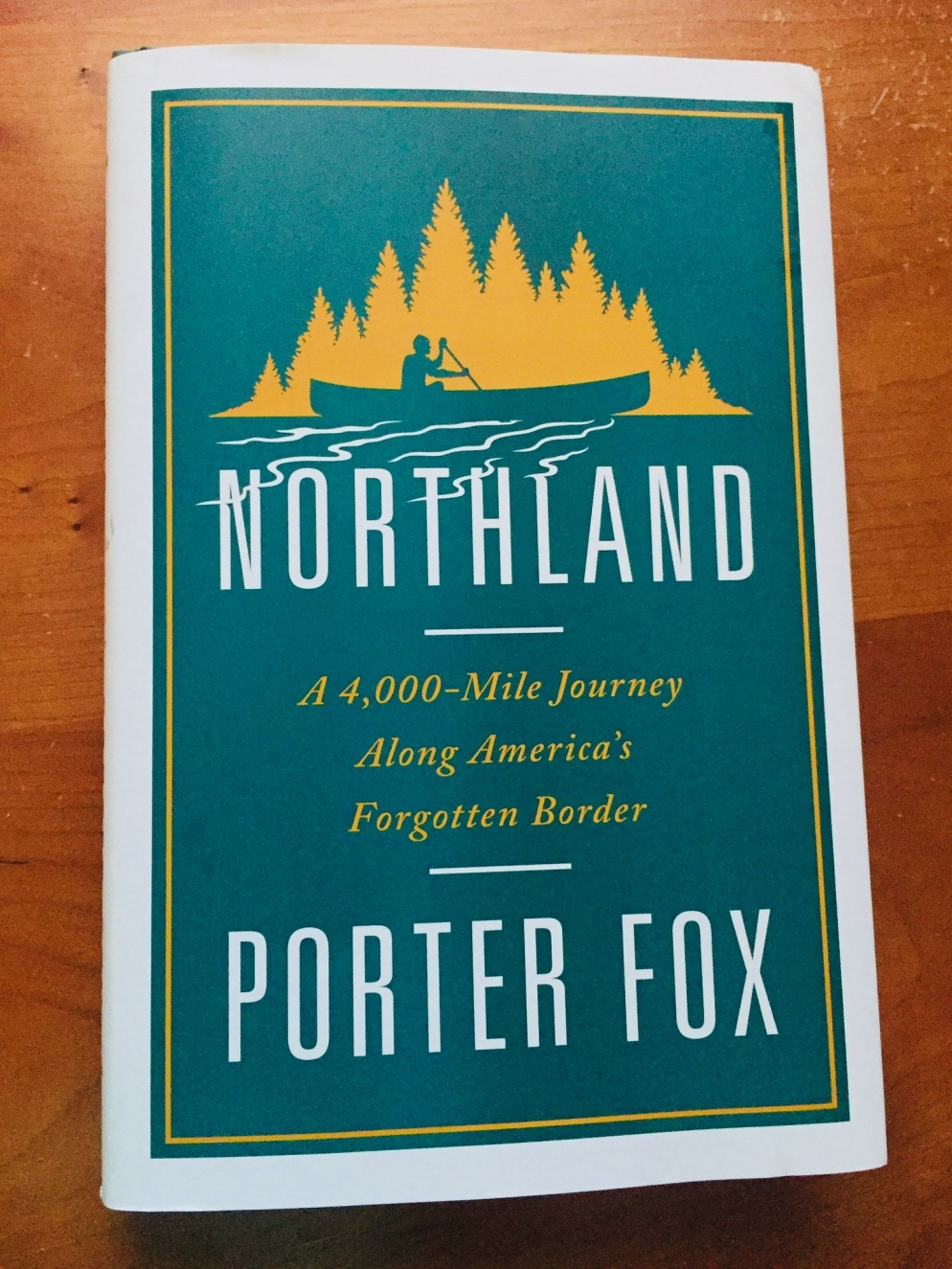 In an age of technology and enlightenment, physical borders remain enigmatically relevant.  While information and intellectual property pass by on hidden virtual pathways, we are confronted daily with news of aggressive border incursions, walls, migration and separation.  Porter Fox’s book Northland: A 4,000-Mile Journey Along America’s Forgotten Border (W.W. Norton and Company) navigates these troubled waters in a modern pilgrimage along the U.S.-Canadian border from Maine to Washington State.

Fox’s adventurous journey along the border (which splits both man-made and natural features, and has constantly been re-drawn and argued by the U.S. and Canada) was conceived during a 2014 lunch with Fox, his editor, and his agent, and brought to life “three years and four thousand miles later” by canoe, freighter, car, and foot.  The fourth dimension of this journey is the history of tribal peoples and European exploration, which Fox weaves skillfully alongside his own narrative.

Fox divides the journey into five parts from east to west: the Dawnland, the Sweet-Water Seas, Boundary Waters, Seven Fires, and the Medicine Line.  Not by accident, the origin of most of these names is drawn from the native populations who are omnipresent in the narrative, their proximity to the border a fateful combination of ancestry and displacement.

Fox finds commonality in all the populations banding the U.S.- Canadian border: social and personality traits mandated by the climate, economy, and the very nature of the stark world between two countries which these “northlanders” straddle.  These commonalities include “[e]thnic communities with centuries-old histories, small towns that modern America skipped over, forgotten industries and Old World professions that rely on hands, not machines.”

The saga of these northlanders is not the only origin story: the birth of many things, from the U.S. Coast Guard to Thousand Island Dressing, is hidden within these pages.  Fox takes the best approach in a travel book, making himself an observer, rather than an actor, and documenting the stories of those he encounters.  This is not navel-gazing, this is journalism.  Fox’s own story only emerges during brief memories of his own northland origins in Maine, or in humorous or poignant interactions with people along the way.

Fox also refrains from preaching or taking sides – any reasonable person can make their own conclusions regarding the effects of global warming, incompetent border management, marginalization of native peoples, or over-fishing and deforestation, making a diatribe superfluous.  Fox observes:

It looked like night.  The sky and land were dark.  Flames blazed above tall, cylindrical smokestacks, casting orange light on the ship.  The waterfront was barricaded by dunes of iron ore pellets and coal.  It was nine in the morning.  The water was oily green.  I looked through the porthole in my cabin and saw a truck pour molten slag into a ditch.  A bright-orange splash flew into the water and incinerated a duck swimming by.

Thus continues Fox’s story of his journey from the Saint Lambert Lock in Montreal up the Saint Lawrence Seaway through the Great Lakes (Ontario, Erie, Huron, Superior) to Thunder Bay, Ontario on the Algoma Equinox, a 740-foot freighter, reading like the opening of a post-apocalyptic version of Ben E. King’s Stand by Me.

It is in this excellent section on The Sweet-Water Seas that Fox truly hits his stride, capturing the chaotic, spooky world of the Equinox and its crew, as well as the unforeseen benefit of only traveling ten miles an hour.  Fox writes beautifully, carefully, and sympathetically about the people and places along this route, interspersing modern vignettes with the movements of glaciers, floods, Champlain, La Salle, and inexorable commerce.

The book is full of these interactive moments that capture so much.  Fox visits the Boundary Waters of Minnesota with Paul and Sue, legendary guides and explorers, watching Sue swing a canoe onto her shoulders for portage, “like putting on a sweater, except the sweater was a sixteen-foot Kevlar hull.”  In North Dakota, Fox visits the Standing Rock protest camp of the Sioux Nation, against the Dakota Access Pipeline, and in Idaho, interviews a militia leader, who gives him “the kind of cheery welcome you’d expect from a car salesman.”

An otherwise-mundane guided tour (“The tour group itself was a thing of antiquity.  I was the only one under the age of eighty.  The comb-over on the man beside me was a work of art.”) of the Glacier Park Lodge in Browning, Montana yields an unexpected insight when the tour guide shows Fox and the group a large-format black-and-white photograph shot in the late 1800s:

The image was of two Blackfeet riders on a grassy knoll.  Behind them were a forest and a few high peaks.  Their hair was braided.  The one in the front wore deerskins; the one behind wore blankets.  Mist covered a valley at the foot of the mountains.  There was no sun – just a dark line between earth and sky.

Amid the cedars, buffalo skulls, and antique china, the photo was indeed the only object in the lodge of extraordinary value.  It was a split second in time from a lost world.  “I like showing people this last,” the guide said.  “I like them to know that we weren’t the first people to live here.”

By the time the journey ends, on a coastal Lummi tribal reservation at the western end of the border in Washington state, the reader has skillfully been transported stride-by-stride with Fox through the past, and across the northland.  In his introduction, Fox explains that he wanted to visit the northland again before it changed for good.  The borderlands seem to change more slowly than the center, giving us a glimpse into the past.  In these margins, we see the cost of progress, and the stark natural beauty of the land that was, giving us pause about the right way forward.

One thought on “Northland: A 4,000-Mile Journey Along America’s Forgotten Border, by Porter Fox”