(Note: this is part one of a multi-part series on the summer 2017 attempt at the 100 Mile Wilderness by dad, 40, and daughter, 11)
On June 30, 2017, we began our 100 Mile Wilderness attempt at the trailhead off Route 15 in Monson, dropped off by grandfather.  Our plan was for mom or grandfather to pick us up at Abol Bridge in ten days.  Before we left home in southern Maine (very early) daughter and dad each weighed our packs/ourselves, and discovered that hers was around thirty pounds, and dad’s about fifty-five.  We missed the parking lot, had to turn around, and saw a male and female cedar waxwing staring at us from the guardrail, which we took as a good sign.
Around 8 AM, grandfather took a picture of us, and we started north into the 100 Mile Wilderness after signing into the trail log.  We read the sign, which said, “THERE ARE NO PLACES TO OBTAIN SUPPLIES OR GET HELP UNTIL ABOL BRIDGE 100 MILES NORTH. DO NOT ATTEMPT THIS SECTION UNLESS YOU HAVE A MINIMUM OF 10 DAYS SUPPLIES AND ARE FULLY EQUIPPED.  THIS IS THE LONGEST WILDERNESS SECTION OF THE ENTIRE A.T. AND ITS DIFFICULTY SHOULD NOT BE UNDERESTIMATED.  GOOD HIKING! M.A.T.C.”
Shortly into the trip, dad slipped on two separate rocks, and cut the heel of his left hand and the pinkie of his right hand badly.  We agreed that hiking poles would have been helpful in the slippery conditions. 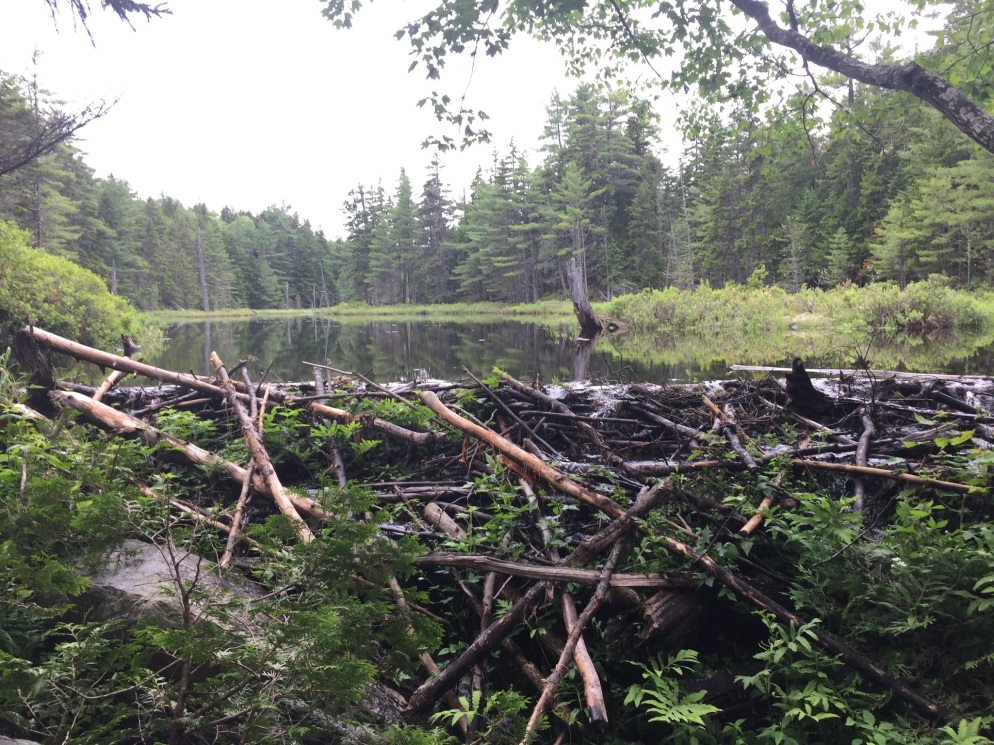 We traversed our first beaver dam, and we both marveled at the ingenuity of these small creatures.  At Leeman Brook Lean-To, we saw our first A.T. Shelter, and took a snack break, opening our peanut butter M&M’s.  We saw our first bear scat on the trail, as well as moose droppings everywhere, and a garter snake sunning itself on the trail.  We stopped briefly to talk to a (male) southbound thru-hiker whose trail name was “Starlight,” which daughter got a big kick out of.
Our first ford of the trip was Little Wilson Stream, which was challenging with the swift current and two heavy packs.  Dad went across, then came back for his pack, then for daughter’s pack, a sequence we repeated on all the fords that followed.
This ford followed Little Wilson Falls (6.6 mi), an impressive 60′ waterfall where we took the obligatory “waterfall selfie” together.  There were also very attractive campsites surrounding Little Wilson Stream.
After crossing Big Wilson Cliffs, we started looking for a good campsite, as we had a big ford coming up of Big Wilson Stream (9.7 mi), and we did not want to attempt it at the end of a long, rainy day.  We found a great spot at the intersection of Big Wilson Stream and Thompson Brook, 9.2 miles past our start, and soaked our feet in the cold water.
Camp set-up took the form it ended up taking the next several nights: we would both pitch the tent, and daughter would take care of the inside set-up/sleeping arrangements while dad hung up the bear bag and prepared our dinners.  We saw a bald eagle near our campsite, and we both had chili mac for dinner to celebrate our first day on the trail.  We started reading “A Walk in The Woods” by Bill Bryson under the light of the solar-powered lantern our friends had given us, and dad quickly learned how to edit dialog on the fly to make it child-appropriate.
Like this post?  Go all the way through.  Try:
100 Mile Wilderness, Days 9 and 10 (Lake Nahmakanta to Abol Bridge)
100 Mile Wilderness, Day 8 (Nahmakanta Stream to Lake Nahmakanta)
100 Mile Wilderness, Day 7 (site on Cooper Brook to Nahmakanta Stream)
100 Mile Wilderness, Day 6 (Logan Brook Lean-To to site on Cooper Brook)
100 Mile Wilderness, Day 5 (Carl A. Newhall Lean-To to Logan Brook Lean-To)
100 Mile Wilderness, Day 4 (West Chairback Pond to Carl A. Newhall Lean-To)
100 Mile Wilderness, Day 3 (Long Pond Stream Lean-To to West Chairback Pond)
100 Mile Wilderness, Day 2 (Big Wilson Stream to Long Pond Stream Lean-To)

One thought on “100 Mile Wilderness, Day 1 (Monson to Thompson Brook)”