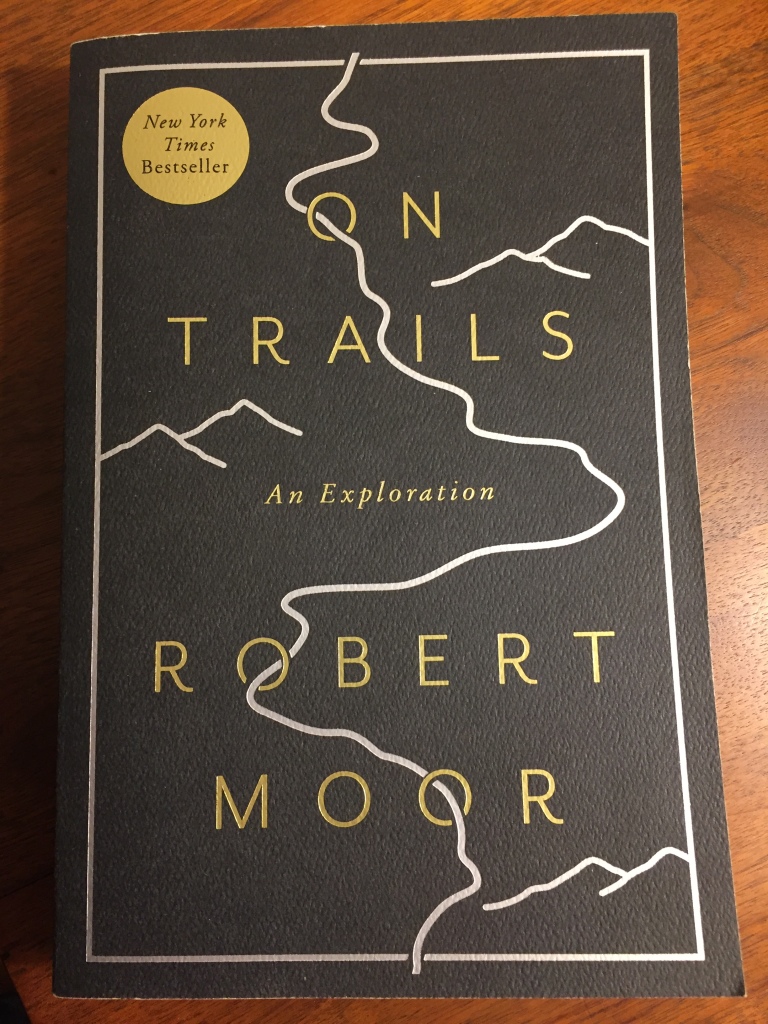 The combination of a March Nor’easter and a good book given to me by a friend convinced me that winter was a good time to add a Book Review section to the Hiking In Maine blog.  On Trails: An Exploration by Robert Moor (Simon and Schuster, 2016) is a perfect first entry in that section, as the book blends a description of the practical realities of hiking with the deeper and more existential reasons for these exertions.

The book opens with a prologue containing Moor’s description of his 2009 thru-hike of the Appalachian Trail (trail name: Spaceman), and how he came to be there.  It also quickly reaches the questions raised by this journey:

As hundreds – and then thousands – of miles of trails passed beneath my eyes, I began to ponder the meaning of this endless scrawl.  Who created it?  Why does it exist?  Why, moreover does any trail?

And so, Moor dives deep, not just into his own Appalachian Trail experience, but into the history of the Appalachian Trail, and the origin of all trails, those created by humans and others: pre-historic organism, slugs, ants, caterpillars, elephants.  In-depth scientific and psychological explorations are punctuated by colorful, whimsical vignettes from Moor’s life, including an amusing stint as a shepherd assisting a Navajo couple in Arizona.

These stories help to anchor the larger themes of the book, including the complicated relationships between man and wilderness, and the American rediscovery of this concept.  In describing the forests of New England, Moor says, “Walking through them- wolf trees, walls, and all – one starts to realize that the only thing more beautiful than an ancient wilderness is a new one.”  Moor skillfully interweaves insights like this one with his section hike of the Appalachian Trail in New Hampshire alongside Gilliam Jackson, a Cherokee man, and the other hikers along the way.

A trip to the Atlas Mountains in Morocco to scout routes for the International Appalachian Trail (IAT) ends the main section of the book, and again, Moor blends explorations of the concept of the trail with humorous and poignant anecdotes of his interactions with the people involved, from planners in Maine and Iceland, to guides, to a prickly Moroccan dog owner.

Moor brings the book to a close with a superb epilogue, in which he connects the trails he has described with the paths taken in life, illustrated by the parallel lives of Han-shan, an ancient Chinese poet, and M.J. Eberhart, AKA Nimblewill Nomad, a legendary modern hiker who has given away most of his possessions, and makes observations on why we hike:

One of the chief pleasures of the trail is that it is a rigidly bounded experience.  Every morning, the hiker’s options are reduced to two: walk or quit.  Once that decision is made, all the others (when to eat, where to sleep) begin to fall into place.  For children of the Land of Opportunity – beset on all sides by what the psychologist Barry Schwartz has called “the paradox of choice” – the newfound freedom from choices comes as an enormous relief.

Moor’s book has the character of a journal entry that expanded and took on a life of its own, supported by anecdotes, science, and literature.  In the hands of a less capable writer, this concept could sprawl endlessly and without direction, but here it flows brilliantly.  Moor’s book is truly a meditative exploration, as the sub-title indicates, and its composition is as excellent as Moor’s insightful prose.  Where he could create trite axioms or smug conclusions, Moor acts instead as a skilled guide, allowing the journey to create a deep question, and leaving the final destination to the reader.

2 thoughts on “Book Review: On Trails: An Exploration, by Robert Moor”